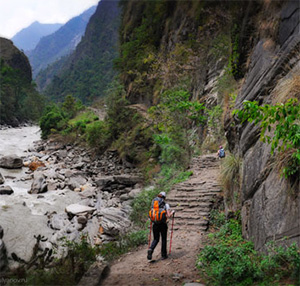 As some trekking trails in the Annapurna Region have been turned into roads, the Manaslu Circuit is a great alternative for longer trek with spectacular views.

The Manaslu region, a restricted area, is nowhere near as developed and the circuit of the world's eighth highest mountain is an ideal challenge for first time trekkers, and those who may have previously visited the Everest Region. The trek starts from Arughat, a large prosperous bazaar in central Nepal. The trail leads through bamboo forests and clings to the side of cliffs in deep gorges, penetrating into the heart of the Kutang Region. This region is inhabited primarly by Gurungs, who practice Buddhism. The trek then continues into the Nupri Region, a fascinating area inhabited by descendents of Tibetan immigrants. Complimenting these contrasting cultures are some superb view sites, with incredible views of Manaslu (8,163m) and the Himalayas

Day 01: Arrive and Transfer to Hotel. Stay overnight at Hotel. 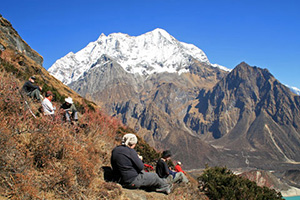 Day 04: Trek from Arughat to Sundi Khola (730m.) about five to six hours.
On Your first day on the trail you head north, following the Buri Gandaki. In the low country, rice paddies and picturesque hamlets surround you. After climbing briefly to Kyoropani, you descend once again to the river and your campsite at the confluence with the tributary of Sundi Khola. It is a nice first day not too long, and perhaps you have time for a refreshing swim sometime during the day for it is hot in the low country.

Day 05: Trek from Sundi Khola to Machha Khola (930m.) about four to five hours.
The country changes, the broad valley narrows and at times the trail is cut into the steep valley side, which is densely forested. You pass a number of small villages, tucked into the hillside, until you reach a widening of the valley, opposite the point where a large tributary stream enters the Buri Gandaki. The terraced farmland here belongs to the village of Lapbesi. You descend once again to the wide, sandy riverbed and follow a path, which runs below the steep, craggy valley side. At length, you have to climb up once again on a trail to Machha Khola. You camp outside the village, which has a number of teashops.

Day 06: Trek from Machha Khola to Jagat (1370m.) about five to six hours.
You cross the Machha Khola - Fish Stream - and head upstream to the tiny village of Khola Bensi and the hot springs at Tatopani. The valley sides are steeping until they are impassable and the route then switches to the left bank by way of a suspension bridge. The trail is quite exposed and challenging in places. After a short section of forest path you reach the single teahouse at Doban. Above Doban, the Buri Gandaki descends an impressive series of rapids. Beyond this steep section, the river is much more placid, meandering across a broad gravel bed. At Lauri, you re cross the river on a suspension bridge, and then climb on a high path to the fields of Jagat, where you camp.

Day 07: Trek from Jagat to Deng (1860m.) about seven to eight hours.
After descending a long series of stone steps to the river, you climb a terraced hill to Saguleri, from where you can see the impressive Sringi Himal, 7187m. Crossing the river again at Gata Khola, the path splits, with the right-hand branch heading off towards the Ganesh Himal. Your route continues upstream, through a gorge section with towering walls. You cross the river three more times in the next two hours to avoid difficult valley sides and then climb up over a further steep spur to reach the village of Deng (four houses), where you camp. Today is a longer day of around seven hours trekking.

Day 08: Trek from Deng to Ghap (2380m.) about seven to eight hours.
The valley is still steep-sided and most impressive. You cross to the village of Lana, and start to see mani stones (prayers etched onto wayside rocks), a sure sign that you are entering the high country Buddhist regions. After only about four hours you reach your camping place at the village of Ghap, which straddles the river. You have entered the Tibetan areas and the cultural change is obvious, and the climate change is obvious the trekking is pleasantly cool now, as you start to gain the altitude.

Day 09: Trek from Ghap to Lho Village (3020m) about six to seven hours.
You gain altitude to take you into alpine territory and increasing mountain views. There are more Mani walls and 3 more crossing of the Buri Gandaki on your route to Namrung, where your special permit is checked. Above this village the valley opens out and there are extensive pastures. Climbing gently now, and cross a large stream flowing down from the Lidanda Glaciers, and reach the Tibetan village of Sho, 3000m. You get your first incredible views of the Manaslu North and then of Manaslu main ahead from Sho. As you continue, you come to Lho, a large village at 3150 metres where there is a lovely little monastery and numerous chortens and Manis. Looking back Ganesh I is visible. You camp just outside the village.

Day 10: Trek from Lho Village to Sama Gaon (3390m) about six to seven hours.
Leaving the village, you follow the right bank of the river, with views of Peak 29 ahead. As you continue on the main trail, you soon reach the fields of Sama Gaon, 3500m. You camp at Sama Gompa, 20 minutes beyond the village, or Samdo, near the Tibetan border.

Day 11: REST DAY
Surrounded by mountains in a peaceful forest, you take a rest day to acclimatize and relax. It is a good time to catch up on that book or wash clothes.

Day 12: Trek from Sama Gaon to Larkya Lodeg (Dharamsala,4460m) about five to six hours.
The once large Buri Gandaki is now merely a stream as you continue to follow its course ever upwards. Everywhere you look are mountains, as spectacular as they get and Manaslu is particularly impressive. After crossing to the East bank of the river, you reach the last permanent settlement in the valley, which is called Sumdu. Above the village, you cross the stream, which runs down from the Gya La (Pass), the pass to Tibet, and there is the ruin of another village here known as Larkya Bazaar. Presumably this village thrived on trade with Tibet over the nearby Gya La, a trade that is now much diminished. Nearing the Larkya Glacier, you reach a lodge at 4450m, which has been built to serve the travelers crossing the Larkya La.

Day 13: Trek from Larkya Lodge to Bimthang (3590m) about seven to eight hours.
After a short climb above the lodge, you reach the ablation valley on the North side of the Larkya Glaciers. There are views of Cho Danda and then of Larkya Peak. Finally, you walk across the moraines of the glacier, making a gradual ascent, which becomes steeper only in the last section to the pass. From the pass, there are outstanding views of Himlung Himal, Cheo Himal, Kangguru and the huge Annapurna II. Initially, there is a steep descent over snow and then screw, to reach the ablation valley trail to Larcia Kharka. A further hour on a moraine ridge path leads to Tanbuche 3900m in pleasant forest.

Day 14: Trek from Bimthang to Tal about four to five hours.
Below you is Bimthang, a broad and level ablation valley with a number of Mani walls and deserted houses. Crossing this high pasture, you descend the valley of the Burdin Khola to the area of the Base Camp for the West side of Manaslu. From a ridge at 4150 meters, you have excellent views of Manaslu to the South East and Annapurna II to the South West. Beyond a bridge over the headwaters of the Dudh Khola, you descend into a rhododendron forests and follow a trail through a narrow valley until you reach the highest cultivated land in this valley at Karche, 2785 metres.

Day 17: Transfer to Airport & Flight Back to Kathmandu, Transfer to Hotel and Stay overnight at Hotel.

Day 18: Departure to Airport and Fly Back to Home. (B)